The Polar Star between Ursa Major and Cassiopeia

The Polar Star is the most famous star because it is almost perfectly on the extension of the Earth’s axis in the sky, the celestial North Pole (less than 1 °), around which everything seems to rotate (from east to west) in the arc of the night for the rotation of the Earth (from west to east). It is always found almost at the same point in the sky of a given location; it is the last star of the tail of the constellation Ursa minor and is high on the horizon as the latitude of the place of observation.

How to find it? Turn to the north (back to where the Sun is towards noon) and look for the seven stars of the Ursa Major which form a trapeze with a three-star tail. Take the two stars called pointer, Dubhe and Merak, from the side of the trapeze where there is no tail, and extend the line that connects them in the opposite direction to where the tail goes: the first solitary star that is found is the Stella Polare , last of the tail of the Ursa Minor.

If the Ursa Major is low on the horizon, as in this period, and it is not possible to find it, we can help by looking for a constellation in the shape of W, Cassiopeia; almost perpendicular to the line that joins its three superior stars is the Polare, located approximately half way between Cassiopea and the Orsa maggiore. 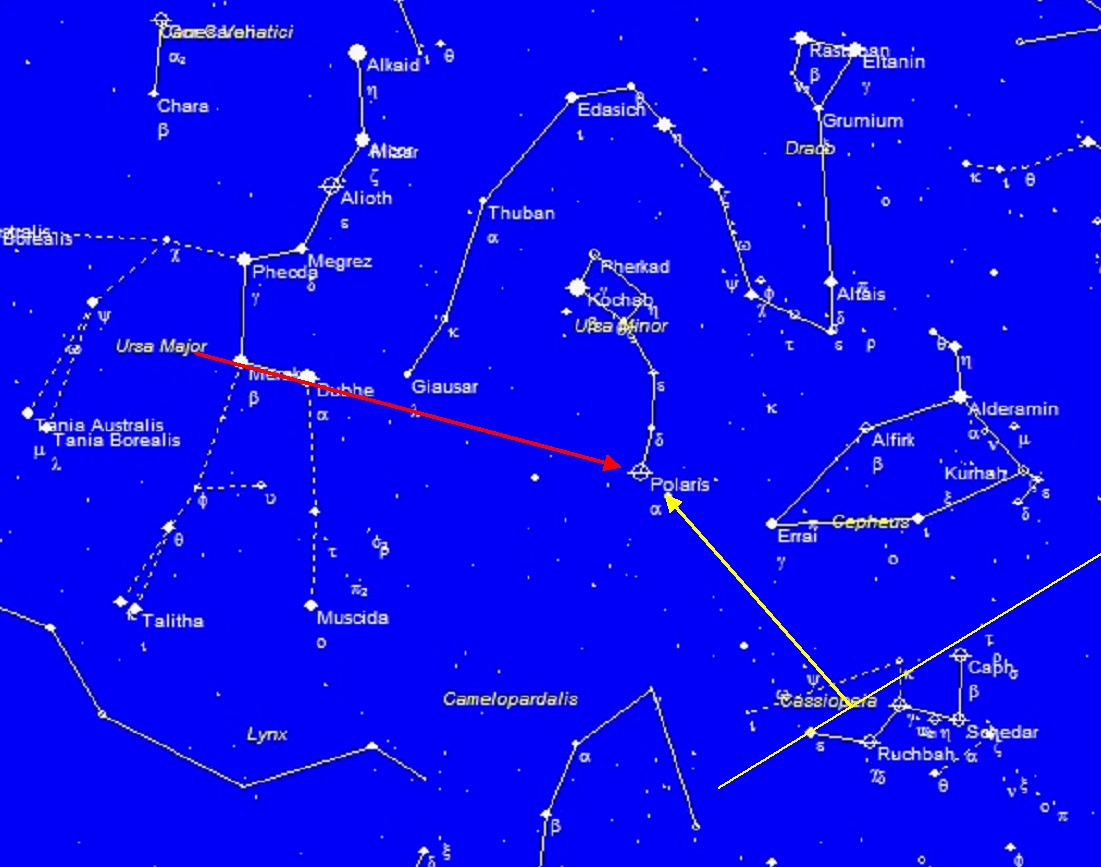 How to find the Polar Star

The Polar Star is not very bright despite being a yellow supergiant, because it is 431 light years from Earth; it is a Cepheid variable (magnitude ranges from 2.1 to 2.2 in 3.97 days) but it seems that since 1965 it has become constant; he has two dwarf companions. The other stars of the Orsa minor are not very bright and can only be identified in a very dark sky, except for the two trapezoids opposite the tail, Kocab and Pherkad.

According to Arato, the constellation represents Ida, one of the two nymphs who bred Zeus newborn: while the other, Adrastea, would be identified with the Ursa major.

In the Ursa Major, the trapezium that identifies it, as well as the two pointer stars, consists of Phekda and Megrez, followed by the tail or rudder with the stars Alioth, Mizar and Alkaid. Mizar is a multiple star and already with the naked eye you can see a companion of magnitude 4, Alcor; while with another small telescope one can see another; since each of these three stars is in turn a double it is a system of six stars.

The seven stars of the Ursa Major represented for the ancients the seven oxen that pulled the Chariot of the Sun: Septem Triones in Latin, from which the word “Northern” derives.

Ovid identifies the constellation with the bear in which the nymph was called Callisto da Giunone, to punish her for having a son, Arturo (the first star that is following the tail of the Bear), by Jupiter.

The Sky Map is taken from Skymap, a demo version of the downloadable software from http://www.skymap.com

Around January 3rd, the Earth is in Perieli, that is at the point closest to the Sun of the Earth’s orbit, which, […]

In November the Sun crosses the whole Libra constellation moving eastwards; on the 23rd of the month he enters the Scorpio, from […]

The Sun until mid-February is in Capricorn and then go to the Aquarium. The days continue to grow and in the night […]