Spring has arrived and, despite this year the sun appears rather shy, the blooms explode exuberantly and colored. Very difficult to contain on one page the multitude of flowers that open their corollas since March. It may be more interesting to divide the blooms for macroambients from March to May, to better understand the reasons why some blooms precede others. The first environments that see their flowered vegetation are the most sheltered and sunny: woods, thermophile walls and countryside. We will take care of these months.

In deciduous woods, the litter is covered with flowers as early as March. The light filters through the still bare branches and stimulates the blooms. Also important is the function of litter, which protects bulbs and roots from the cold, since these forests are developed in climatic bands in which in winter it can easily snow. This is the reason why in January and February we saw bulbous or rhizomatous species like Snowdrops, Crocuses and Anemones opening their corollas in the face of cold and snow. In March, before the leaves are snacked, Primroses, Violas and Cyclamen open up. Many species of Primrose specialized in different habitats: the most common are the Common Primrose (Primula vulgaris), which we find in the woods and meadows up to 1500 meters and the Cowslip (Primula veris), very common in meadows, pastures and woods up to alpine plan. In the woods the bright yellow of the primroses is contrasted by the lilac of the spring Cyclamen (Cyclamen repandum), more lively than the Ivy Leaved Cyclamen (C. hederifolium) which blooms in autumn. The Heath dog-violet (Viola canina) at the end of March dyes the clearings and the edges of the woods, while the pastures and the uncultivated houses the Field violet (Viola arvensis) and the more colorful Wild pansy (Viola tricolor).

The queen of all the flowers that dye the litter of the woods in March is the Coral Peony (Peonia mascula), which begins its flowering in this month and, depending on the altitude and exposure, ends it in June. It is one of the most visible flowers of our latitudes and has entered many local cultures as a lucky flower or witch flower.

The Judas tree (Cercis siliquastrum) is one of the first deciduous trees to bloom; species very rustic and adaptable, before putting the leaves exhibits its numerous bright pink flowers, forming spots of color in the open areas of riparian forests and on rocky slopes. Even in the Poplars (Populus sp.) The flowers appear long before the leaves and already in early March the catkins sway at the slightest breeze; in the Oriental hornbeam (Carpinus orientalis), on the other hand, the catkins appear together with the leaves.

If we leave the most humid habitats and head to drier and warmer areas, we find evergreen species. In the areas where the vegetation is higher and thick and the soil is slightly acid, the Bay Laurel (Laurus nobilis), the Mediterranean Buckthorn (Rhamnus alaternus) and the Common box (Buxus sempervirens) are in bloom, while the “Green Olive Tree” (Phillyrea latifolia, P. angustifolia) prefer sparse vegetation and calcareous soil. In the more open areas, the Mastic Tree (Pistacia lentiscus), after having helped with its star-shaped berries to overcome the winter, sees the dense inflorescences appear in which are mixed dark red male flowers and small greenish flowers.

Continuing our walk towards increasingly exposed and sunny microclimates, we find landscapes illuminated by the white of the Tree Heath (Erica arborea) and the intense yellow of the Spiny broom (Calicotome spinosa); in the ravines, the intense violet and the scent of French Lavender (Lavandula stoechas).

On the plain, while the most degraded areas whiten the blooms of the vast populations of Asphodelos (Asphodelus aestivus), the countryside and the uncultivated land that still retain fertile soil are transformed into a palette of colors composed of small delicate flowers: the yellow of Spotted Rockrose, (Tuberaria guttata), of the Dandelion (Taraxacum officinale) and of the Grass pea species (Cicerchia sp.); the blues of the innumerable Veronica species (Veronica sp.) and of the Field Forget Me Not (Myosotis arvensis); the pink of the velvety Hairy Pink (Petrorhagia velutina) and the Herb-Robert (Geranium robertianum).

It is impossible to mention the other hundreds of species that begin the adventure of reproduction this month. You just have to leave the house and let yourself be led by the legs … you will find colored corollas everywhere that will make you forget the daily cracks!

The abundant rain that has characterized this spring has made the spring vegetation luxuriant, showing phenomenal blooms for abundance and exuberance. The […] 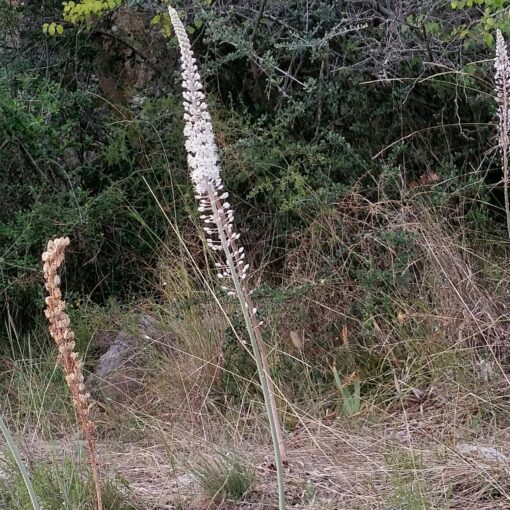 September. A torrid and dry summer ends, the hope is that autumn will return some water to the parched land. But the […]